TLT13 - My presentation on Questioning (hasty draft - no time today)

So I foolishly said yes to David Fawcett... It was the summer term and I thought I would have a bit more time... 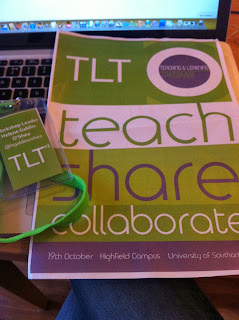 Anyway, having focused on questioning, particularly recording my endeavours with year 10 last year, I thought I would have something to say. I had tried to do a bit of deliberate practice and was aiming to record some lessons to help me fine-tune my skills. It didn't happen but I did take some notes with a focus on a few target pupils. After reading Alex Quigley's post on deliberate practice and chatting to him briefly at Clevedon in the summer, I was more determined than ever to be ... rigorous.

This year, I started with a new year 10 class. It made me realise how far we had got with last year's lot and how far I would have to go with my new class. I do believe that my efforts last year have had some impact on some of my pupils' outcomes and general attitudes towards their learning. I was focusing on a group of boys whose lack of motivation and grit in English was a particular concern. I should have blogged regularly; I never really found the time. But I do own a great number of notebooks!

It was also the starting point for my presentation. Thanks again, Alex.

Later on, I also read and was inspired by Harry Fletcher Wood's effort excellent posts (he's clearly more rigorous than me):
http://improvingteaching.co.uk/tag/deliberate-practice/

Anyway, I'm no great thinker or writer so after wondering (and worrying) about how I could give a talk on questioning to a group of professionals who use questioning every day, I decided to go back to my default position and share what I do in my classroom.

So why questioning? As I said in my presentation, why not? I remember only too clearly my PGCE and early years as a teacher. I remember feeling grateful to pupils who would bother responding to my questions, so grateful that I could hardly even listen properly to what they had to say.
Even though I gradually got better, I continued for years to lead boring "tennis match" style Q&A sessions in class that could last up to 20 minutes during which half the class would be asleep, pretending to listen and/or glad not to have to participate. The same kids would put their hands up and the same kids would be asked questions. The questions became better and better, for sure, but something had to be done.


Alex uses a Bruce Lee quotation in his post: “I fear not the man who has practiced 10,000 kicks once, but I fear the man who had practiced one kick 10,000 times.”
I only know too well what he means by this. Adapting our strategies after reflecting on their impact in the classroom is surely the way to go if we are going to become better at what we do.

I wanted to kick off with a clip straight from my classroom to prove that I'm not an expert and would hate to be held as one. I have finally worked out how to use the STAR camera we have at school and have been recording lessons and watching them back. Plenty of cringe moments for sure. In this clip, I asked students as we were reading chapter 4 of Of Mice and Men how they could explain Crooks' behaviour and attitude towards Lennie.
The first student I picked on gave an interesting response. The second student (one of my target student) was asked for his reaction to that and ... well, turns out he had only been pretending to listen. I didn't set out to catch him out - I just did. And unfortunately, it was recorded. The 'doh' moments kept coming: I repeat student A's point before realising that, really, he should have been doing that; I end up pleading the student to "Clarify! Clarify!"; student B tells the first one to 'shut up' after a while (he said it jokingly but still... First time that we've had this language in the classroom this year and you can tell everyone suddenly gasped), I tell one of them that he's 'doing my head in'... Frankly, by this point, I was thinking of deleting the whole thing. But hey, we persevered, student C gave a short but great answer, adding the word 'defensive' to the discussion to explain the character's behaviour, and lo and behold, student B had a lightbulb moment which made it all right again.

We didn't fully discuss the clip in the session. I was still trying to find my bearings and seriously wondering how much time I had till I had to let these lovely teachers go! Pity.

[Note: Can I point out that exporting the video has somehow distorted my voice (I still hate it) and has given me a strange speech impediment with the 's' sound? I think I'm too close to the mic)

Onwards and upwards. I proceeded to talk about deliberate practice as set out in Alex's blog and noting the fact that despite the best intentions, I had found it hard in reality to find a 'time and space' to record things systematically, that I didn't really have a coach or 'critical friend' (well, I did talk quite a bit with one of my colleagues last year but not this year), but that the camera really helped and anyway, I tend to be my harshest critic.  This year, I am being more systematic in my targeting of students and gathering of evidence. 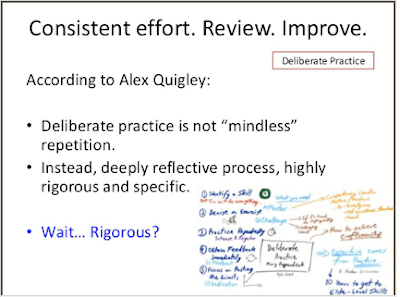 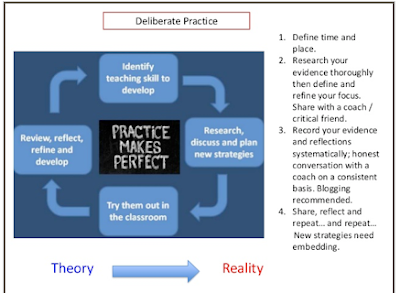 We then ask ourselves as a group: 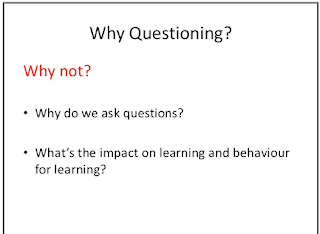 And heard some great suggestions. I had prepared a few that I shared.

Incidentally, in the feedback, I started repeating some of the teachers' responses for everyone's benefit and kicked myself. I've spent the last 2 weeks trying not to do that in class... See Andy Buck's great blog here about dialogic teaching: http://andybucksfizz.wordpress.com/2013/10/05/harnessing-the-benefits-of-dialogic-teaching/ 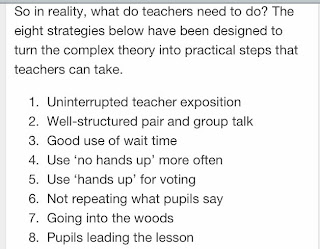 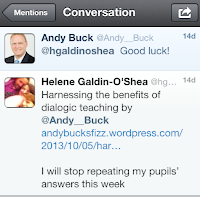 I'm off on another tangent here...

Okay, back to the talk. I then talked about some of the strategies that have had the biggest impact on my teaching and the kids' responses over the last few years, namely: using no hands up most of the time (with hands up mainly for polls, Yes/No etc...); increasing the "WAIT" time before asking for an answer (most of the time); using "Bounce" in one way or another, getting pupils to build on others' contributions, which means listening actively as well. In other words, we're talking about embedding habits that do change the ethos of the classroom. 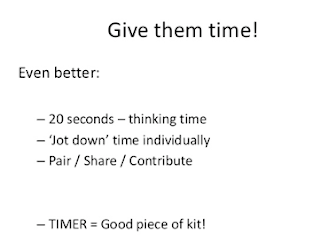 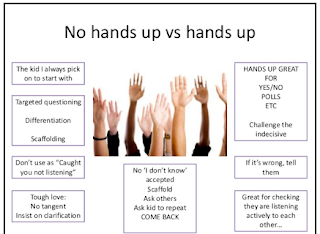 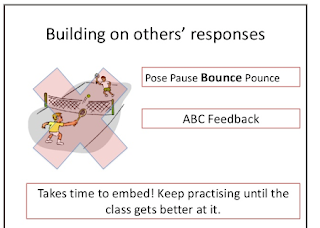 My transition to the next bit was non-existent but in my head I was moving on to sharing a few slides I put up, particularly at the start of the year, at the start of my lessons. It's not exactly about questioning per se but they are questions nonetheless, and I would argue that they are questions I hope the pupils are asking themselves. I refer back to these throughout the lesson or I point back to them - the arrow especially) when some of the children's concentration starts to slip (again, I'm thinking of that target group last year):
[Note: the first one below was lifted from a blog by Pete Jones @Pekabelo] 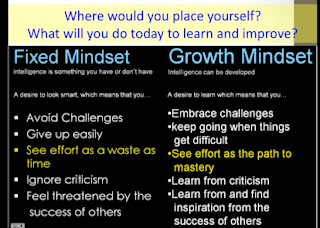 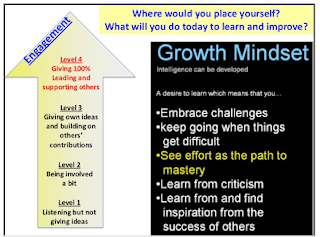 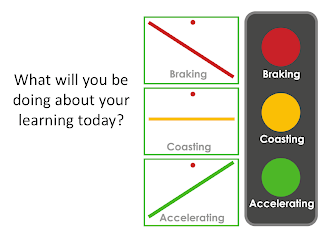 Discussing this in class has actually made a difference and it is worth asking pupils questions about mindsets and attitudes to learning. It is another little step in cultivating the right atmosphere / culture / ethos.

Another change of topic without any elegant transition saw me moving on to getting students to ask more questions.
I won't go into detail here as I have blogged about this before. I went through some of the work my students have done, most recently on Of Mice and Men, when they came up with some questions on chapter 3, refined them with the mark scheme in hand, refined them again, and finally answered them.
When I get a second, I'll add more detail. 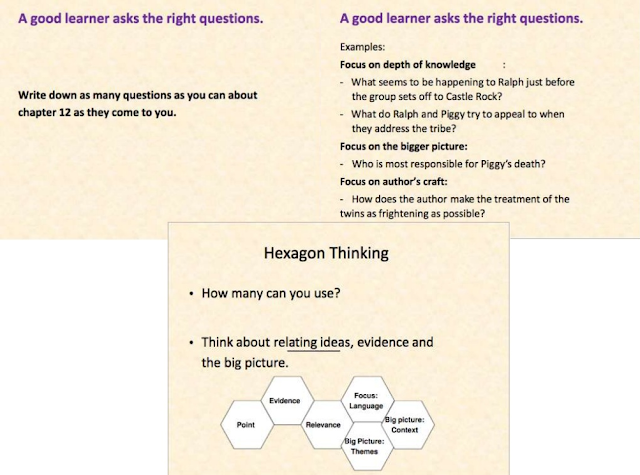 Of Mice and Men: 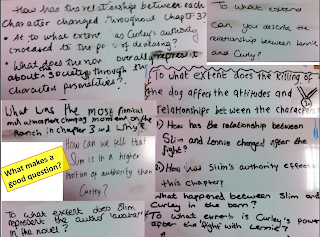 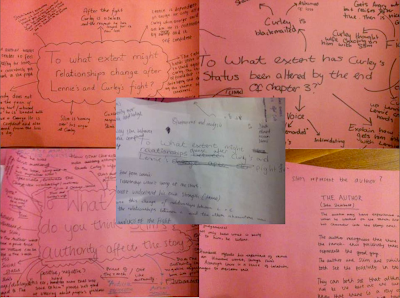 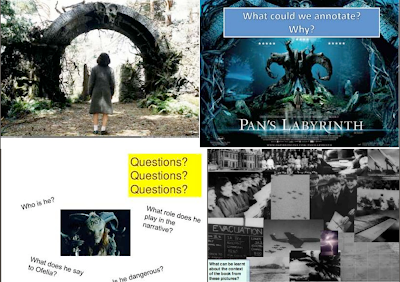 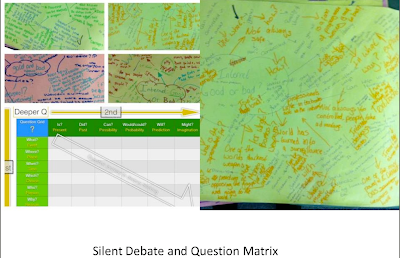 Starting and finishing lessons with questions to and from students. I probably went too fast over all this but time was ticking.
WARNING - The following ideas might require post-its :) 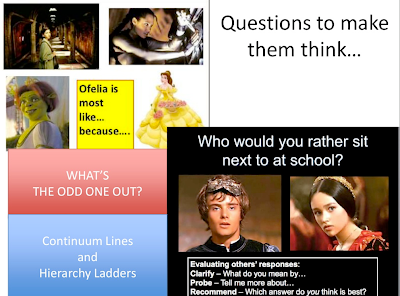 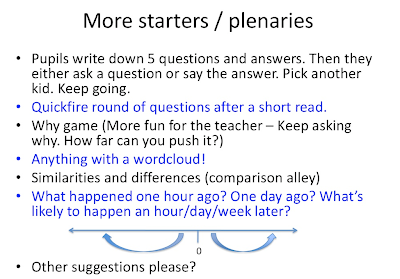 Example of Wordcloud (Here, text from the poem Catrin) 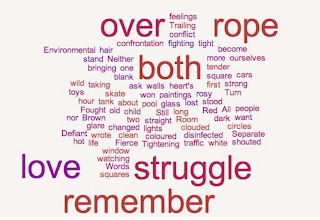 Stone Cold - Learning objective over a series of lessons. More questions added (and answered) around the boxes with each passing lesson. Nicely builds continuity and a real sense of progression over time. 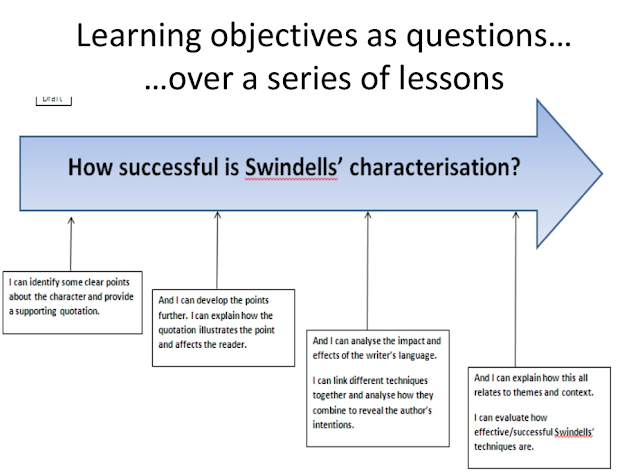 Poetry - Okay, the LO is not a question here but I forgot to take pictures of the revamped slides... But you get the idea. The students still ask questions to help their group plan ahead, think about how to break down the tasks, think about analysing the texts in more depth etc... 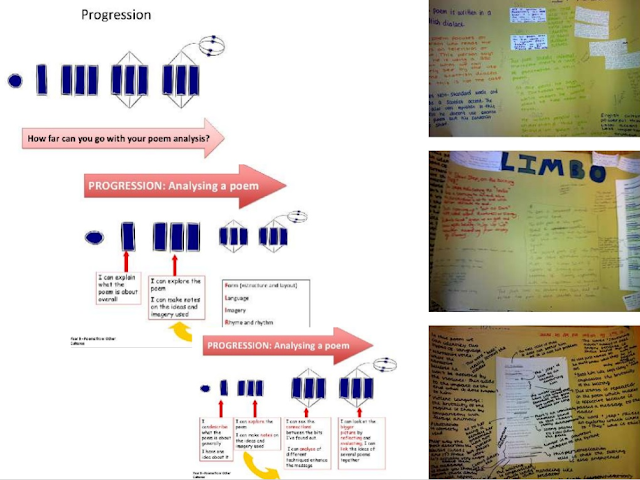 In other words, we should aim to do an awful lot of this: 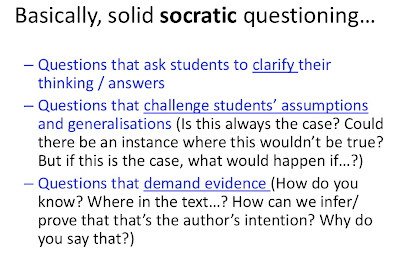 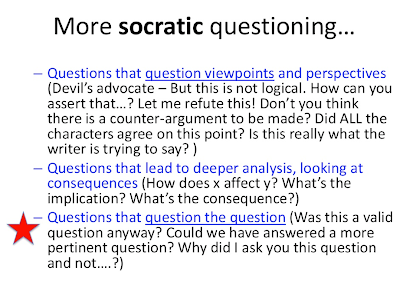 I actually found this on Twitter last week which I shall be using in the classroom (I cannot credit the author unfortunately as I have no idea who designed it): 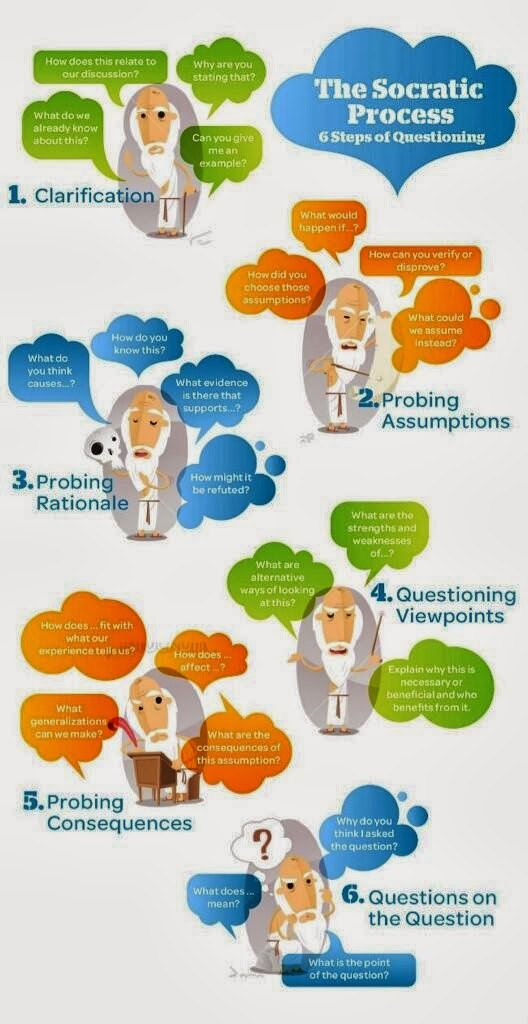 And finally, I meant to finish with a more profound point... Not really, but I thought that this would be important to mention. 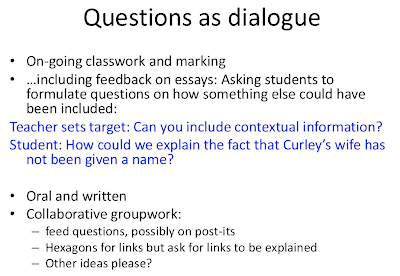 Unfortunately, it was getting clear from the noise in the corridor that it was lunchtime and therefore time to let my lovely audience escape and recharge. So like a bad lesson, I mumbled a few last words and left it there.

Overall, I have found that training students to ask and respond thoughtfully to my questions, and to their peers' questions and points, has brought about many rewards. The relentless questioning of the highly able students challenges and stretches them. Their own questions show an increasingly solid understanding of what it is that we're trying to assess and an increasingly sophisticated way to think about texts and authors' intentions. The trickier characters I was focusing on settled into better habits and contributing definitely became 'normalised', leading to better focus and outcomes.

Thank you to everyone who listened to me. I enjoyed it!

The slides are here:

#TLT13 Presentation on Questioning from hgaldinoshea